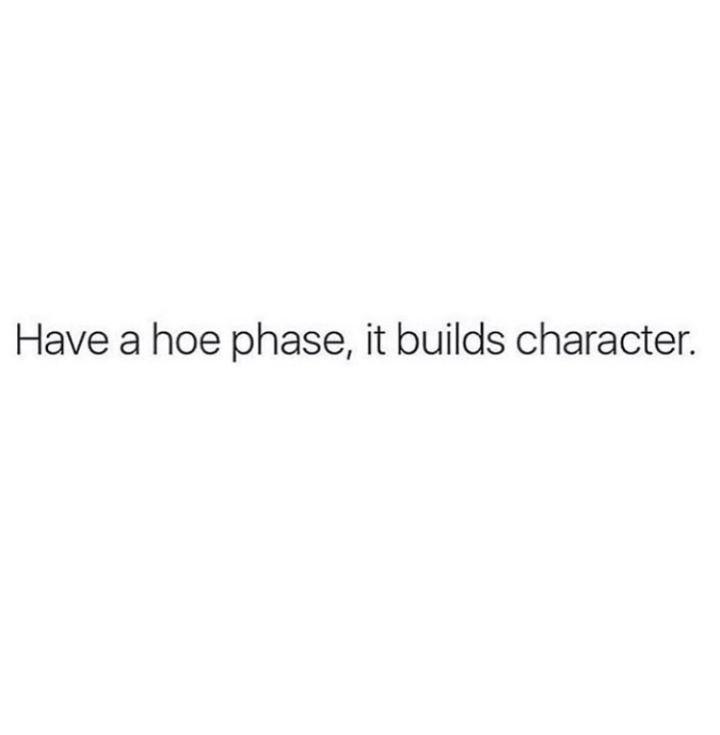 I’m not gonna hold y’all I’ve been feeling real uninspired to write which happens sometimes . But then like a ain’t shit n*gga with good dick coming to ruin your life out of nowhere some inspiration showed up in the form of a twitter argument . Which I get into a lot , somebody is always coming for the kid probably cause I’m always saying something wild. So the person calls me a hoe right and I was like umm am I supposed to be offended ? My @ name literally has the word hoe in it and I’ve spent money from my paycheck to purchase a website that also has the word hoe in it so why would someone calling me a hoe hurt my feelings ? Shit my friend, Los, and I use the term friend loosely cause I never know with him, calls me a hoe when he feels like it and it honestly doesn’t hurt my feelings. Mainly because I know if there’s a hoe competition between me and him he’s definitely winning but also because I know my truth and I just don’t give a damn . If you ask 20 people what a hoe is they’ll give you 20 different answers as to what a hoe really is because in the dictionary a hoe is a gardening tool and I am not a gardening tool .

Then to give me more inspiration the Ayesha Curry fiasco happened and people were in a tizzy. This woman who is the ideal woman for so many men, wants to be wanted. She wants to be lusted over by other men who are not her husband? But why? Of course people made assumptions about Mr. Curry not hitting it right and blah blah blah blah, I mean is he? I don’t know and the world doesn’t need to know but what I do know all of this led to my favorite topic the hoe phase. So let’s talk hoe phases. I’ve had mine. The lord knows I’ve had mine && you can’t shame me cause I know what I did already, I was there and I probably had fun . I was wyling to say the least . I had Hoes Callinggggg a young n*ggasss phoneeee , not to mention I went out every chance I got to clubs and concerts and dates and trips and anything else I got invited to. I was out of control but I was also learning things about myself I never knew and let me tell you I am no Ayesha Curry so if that’s what someone is looking for they are looking in the wrong direction. I can’t take back any of the things or people I’ve done and even though I would rather swallow a jean jacket than go back and talk to some of my old joints, I wouldn’t want to. One of my mottos is and will always be “ No regrets only lessons learned “. That’s the beauty of it though someone, somewhere is gonna like me and if they don’t, welp I like me so it’s lit either way .

Honestly though, I think everyone should have a hoe phase and when I say have a hoe phase I don’t mean go full thotimus prime like some bitches ( it’s me , I’m bitches ) and some young men yes young men y’all aren’t excluded. So before I get crucified for encouraging hoe phases hear me out first. We all aren’t the same obviously so everyone’s hoe phase won’t be the same. In high school one of my still best friends Deanna was nicknamed baby angel because she was so innocent. I mean avid church goer and her T-shirt’s might as well have been turtlenecks when me and Mayra used to wanna do hoodrat stuff she used to be like uhhhh you bitches are out of control. We were soooooo different but our friendship worked and still works to this day . So obviously her hoe phase and my hoe phase was totally different. When we got older and she started dating more than one person at a time she thought she was doing alotttt , I was like girl that’s my Tuesday night. Deanna’s “ hoe phase “ was to me an average weekday not even a Friday or a Saturday back in 2012 . I mean there was a time when she wouldn’t wear the dresses she wears now and she wouldn’t drink or party or any of that. There was also a time where she was out getting super lit and throwing up in plastic bags in her room. Now she’s finished her hoe phase and she knows her alcohol limit, she understands she can be sexy and not slutty, and she’s learned so much about dating and who she is as a person. It’s all a learning experience.

I don’t want y’all to go out and give up the crotches to everybody that’s not what I’m saying at all . I’m saying how will you know what you like if you don’t date different people ? Like date as in go on dates not boyfriend and girlfriend, nothing crazy serious . Maybe just some links and drinks as the scammers in Brooklyn say . It doesn’t have to be a $200 date either gentlemen because I know people are always complaining about that but there’s so much that y’all can do if you just think about it for a second . Go on a picnic , go to the park , bike riding , etc . Anyways back to the topic at hand . You’ll find there’s a lot of things you can and cannot deal with when you really start dating people . Can you date people with kids ? Can you date people with different religions ? Can you date someone who doesn’t make you laugh ? Can you date someone who has a different political affiliation. Does race or nationality matter to you ? What about if that person goes out all the time ? These are all really important things to know about the person you’re seeing because some people can deal with it and some people can’t . I know some of my friends like to date within their race and I know some who don’t care . I know some of my friends who date older and some who date younger . It’s all about preference but how do you learn what you prefer without trying different things ? I didn’t know I prefer my steak medium more than well done without trying it .

I think people especially women are always really scared to date because their is a stigma that is associated with it . When you date you’re not having sex with everyone . If you are then that’s on you and I hope you’re being protected . You also have to be open . If someone asks you have to tell them that you’re dating others . Y’all be lying that’s the issue. You cannot be like you’re my one and only when there’s actually twelve . I know from experience. I’ve lied and I’ve been lied to . I don’t have the time anymore so if you ask me these days I’ll tell you the truth and nothing but the truth. I even took a break from dating to get my shit together , I’ll tell y’all about that at another time because sometimes we need to do that too. Yes ladies and gentlemen basically, what I said was to date but be honest and open . Enjoy your life . Take those trips with your friends . Shake it fast and watch yourself in the club if that’s your style . If it’s not then do what you enjoy and what makes you happy . That’s what the Hoe phase is about really, finding out what you cannot stand and what makes you beyond happy . I mean because do you really wanna wake up at 68 and think about all the things you coulda, woulda, shoulda did and didn’t ? Or do you wanna actually do it ?

3 thoughts on “Have A Hoe Phase, It Builds Character .”